ASUS and Google today announced the new Nexus 7, a 7-inch Android handheld with the sharpest ever tablet screen and built-in wireless charging that eliminates the need for clumsy power cable connections. Built to deliver the best of Google in an incredibly slim package that fits perfectly in the hand, the new Nexus 7 continues the successful relationship between ASUS and Google that began in 2012 with the groundbreaking Nexus 7 tablet.

“After the success of the first Nexus 7, we are very excited to continue our partnership with Google with this new model,” said ASUS Chairman Jonney Shih. “The new Nexus 7 puts the very latest mobile technology in users’ hands and sets a new benchmark for tablets.” 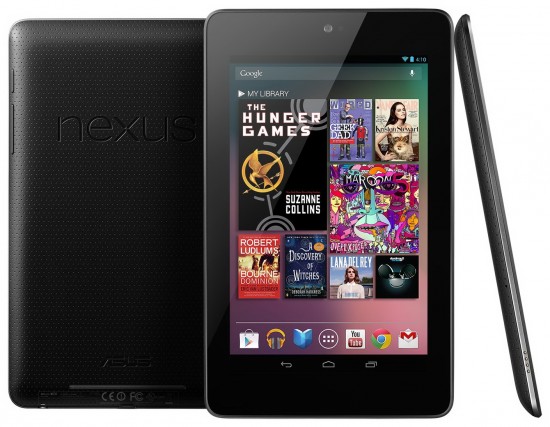 "Together with ASUS, we took what you loved about the original Nexus 7 and made it even better,” said Sundar Pichai, Senior Vice President of Android, Chrome and Apps at Google. “It is now thinner, lighter and faster, with the world's highest resolution screen in a 7-inch tablet. Whether you are sitting at home, in a coffee shop or at the airport, the new Nexus 7 is powerful, portable and made for what matters to you."

The new Nexus 7 is powered by a Qualcomm Snapdragon S4 Pro quad-core processor with 2GB RAM for incredible performance and immersive mobile gaming, all with effortless energy efficiency that gives up to 10 hours battery life. Movies and games sound amazing too, thanks to Cingo mobile audio technology from Fraunhofer, creators of the MP3 encoding format (see www.fraunhofer-cingo.com for details).

Built to deliver the best of Google in an incredibly slim package that fits perfectly in the hand, the new Nexus 7 continues the successful relationship between ASUS and Google that began in 2012 with the groundbreaking Nexus 7 tablet.

The new Nexus 7 is the first tablet to ship with Android 4.3, the latest version of the world's most popular mobile operating system. Tablets are perfect for sharing with others and Android 4.3 introduces restricted profiles that, for example, allow parents to limit children’s’ access to mature content.

Likewise, retail stores can use tablets to show off product information and shops can use tablets as point of sale systems. Android 4.3 also supports Bluetooth Smart technology, opening the door to mobile apps that connect to new devices like fitness sensors. Nexus 7 also comes loaded with Google apps — like Chrome, Maps, YouTube, Hangouts and Google Now — that are designed for the cloud, so everything is simple and works seamlessly across multiple devices.

Google Play is the easiest way to enjoy a dazzling array of content — no wires, no hassle, just pure entertainment. Kick back with the world’s largest collection of ebooks, listen to millions of music tracks, and watch thousands of movies and TV shows — all available in an instant. With an ever-expanding choice of apps designed for tablets, there’s something for everyone.