“The Samsung Series 7 Slate PC was designed for on-the-go users who need a slim, lightweight computer but can’t afford to sacrifice true PC functionality,” said Scott Ledterman, director of mobile PC marketing at Samsung Enterprise Business Division. “Whether you’re using it for work or play, the Series 7 Slate revolutionizes portable computing by providing the latest and greatest PC features without weighing you down.” 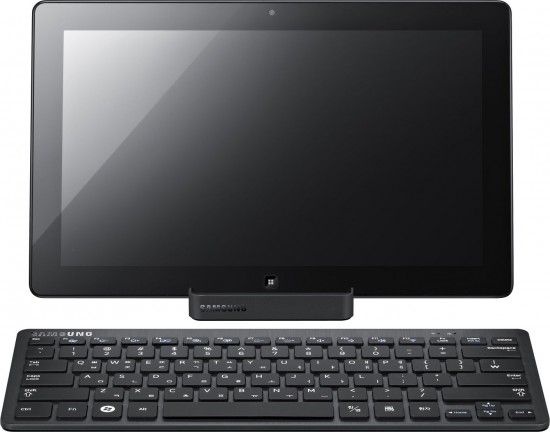 “The Samsung Series 7 Slate PC is a great example of the commitment Samsung has to continued innovation with Windows,” said Nick Parker, Vice President of Worldwide OEM Marketing at Microsoft Corporation.. “With full-PC power packed into an ultraportable device, the Series 7 Slate PC takes mobility to a new level with an innovative touch-focused design that transforms personal computing and enables richer experiences.”

Weighing less than two pounds and measuring only half an inch thick, the Series 7 Slate can truly be taken anywhere. Despite its compact size, the Slate is a full-powered PC with a 11.6-inch screen, powerful Intel® Core™ i5 processor, a full version of Windows® 7 Home Premium or Windows® 7 Professional operating system and an up to 128 GB solid state hard drive, meeting the needs of even the most demanding power user.

Users can quickly type using the on-screen keyboard and navigate through the slate’s features with the highly responsive capacitive multi-touch screen, or write naturally on the screen using an electromagnetic pen, making it easy to take meeting notes, create documents and reports in Microsoft Office 2010, or browse online. An integrated microphone and dual 2MP (front) / 3MP (rear) cameras can record audio/visual files, which can be stored and shared via the full-sized USB port or Wi-Fi, WiMAX and HSPA connection.

The Series 7 features Samsung’s exclusive FastStart technology, which enables the slate to transition from a hybrid sleep mode to full functionality in two – three seconds, enabling users to quickly jump into work or play anywhere. Samsung’s touch interface helps to streamline your life by providing seamless access to applications used every day such as Facebook, Twitter, maps and media content.

The Series 7 Slate was designed to impress. In addition to being easy to transport, its sleek, slim design and elegant detailing will turn heads everywhere, from the boardroom to the train on your commute home.

The Series 7 Slate screen features vivid Samsung Superbright Plus Technology (400 nit), as well as a vibrant 16 million color range, making it ideal for viewing everything from presentations to photos or videos. The wide 170 degree viewing angle makes it easy to view content from anywhere, as well as to display materials to friends and colleagues.

An optional Bluetooth keyboard, docking station and mouse add further convenience and create a desktop PC experience for business users planning to settle in at a desk while traveling. The docking station replaces the traditional desktop by providing the interface and computing power; it also gives users the flexibility to sync up to a larger monitor for even more efficient multi-tasking.

With up to seven hours of battery life, the Series 7 Slate ensures an all day connection for optimal productivity while on-the-go. The inclusion of Samsung Power Plus technology means that the Series 7 Slate battery will retain 80 percent of the original battery capacity for up to 1,500 charges – giving users a battery that works whenever and wherever they need it, even after three years of use.